Over the past 15 years, Portland radio has had many challenges from new media. None of these upstarts, however, has yet to affect radio’s dominance among consumers. As Doug Schoen recently wrote for Forbes Magazine, “You wouldn’t know it from all the media coverage focused on streaming video and streaming music, but recent Nielsen data shows radio actually has the most reach among American media consumers. 93% of adults listen to the radio each week as compared to 87% who watch TV, a substantive difference.”

So despite the onslaught of new media, why does radio continue to reign supreme? That I can tell you in one word: personality! A perfect example of this is Blake & Eva, the two radio personalities who occupy the morning drive time slot on Portland’s Coast 93.1

For two years in a row, the readers of both Down East Magazine and the Portland Phoenix have voted Blake and Eva as the number one radio personalities in Maine. This is not an easy task with the number of stations that live on the Portland radio dial. Given the response to these polls, undoubtedly Blake Hayes and Eva Matteson have figured out how to connect with their station’s 75,207 weekly listeners.  This is a lesson worth learning for Maine small business owners who depend on radio advertising to market their products and services.

Listeners Buy What Their Favorite Personalities Are Selling

Based on the response to the two polls, Blake & Eva’s listeners have clearly formed a bond on intimacy with the duo.  A recent study by The University of California: Annenberg School of Communications and Journalism found that 82% of radio listeners have parasocial feelings for their favorite radio personalities. According to the study’s author, Paula Woodely, a parasocial interaction “describes one-sided interpersonal relationships in which one party knows (or feels as though they know) a great deal about the other.  The most common form of such relationships is between celebrities and their fans. There is an ‘illusion of intimacy’ between media personalities and audience in parasocial interactions.” According to the study:

Why Blake & Eva Are So Successful

Right after Blake & Eva second sweep of both Down East Magazine’s and The Portland Phoenix’s reader poll, I asked them both why they think their radio show resonates so well with their listeners.

Radio Results Blog: Two years in a row, Blake & Eva have been voted as the best radio personalities in Maine by the readers of Down East Magazine and by the readers of the Portland Phoenix. These magazines have totally different audiences. How would you explain your appeal to such a broad spectrum of listeners?

Blake:  We talk a lot about relationships, family, work topics, and general life in Maine — things people of all backgrounds, incomes, and lifestyles can relate to.  Our show isn’t for everyone, but I think everyone can find something in our show to relate to.  And our listeners are such an important part of our show; their calls often guide the topic and they’re WAY funnier than we are!  I think that helps anyone who listens — whether it’s a Phoenix or Down East listener — feel engaged and connected.

Eva: Funny and entertaining appeals to everyone. We strive for mass appeal. What’s trending or popular. Also the topics you might think about, but never say out loud (leave it to me to go there).  Also, a heavy dose of laughter, always good medicine for whatever ails you.

RRB: When the two of you are alone in the studio doing your show, what is your mental image of who’s listening?

Blake: We created a “composite listener” that pulls a little trait from the wide spectrum of our audience.  In order to focus our topics and content we ask:  “Would our composite listener be entertained by this, and would they keep listening?”  For our show, that listener is: a female in her late 30s; a single mom who lives in a suburb but spends time in the city; college-educated; originally from Maine but has lived elsewhere and moved back; an active person who enjoys the outdoors and cares about where she shops and what she eats; likes to be informed but isn’t a news junkie; and listens to the show to hear what’s going on, have a laugh, and maintain her consistent morning routine. Of course that all sounds very specific, but we aim for that and let the content filter through all the other types of listeners we have.  But if she wouldn’t be interested in whatever topic we think of — we skip it and find something that connects better with “her.”

Eva: I see people driving to work alone, wanting to touch someone or be touched, so they look for their “friends” who just happen to be on the radio every morning. Also, busy moms, who need some relief from their busy lives and just need a good laugh.

RRB: Both of you have become paid spokespeople for a number products you advertise on your show.  Why do think this form of advertising is so successful?

Blake: Are you more likely to go to a restaurant you saw a billboard for, or one your friend recommended highly?  Of course, you go with your friend’s suggestion!  You trust their opinion because they have experienced that restaurant, and they know if you’ll like it.  I think that’s why our clients find endorsements so effective.  It’s harder than ever to cut through and reach potential customers — and then make them take action.  In the same way you’re way more likely to make a reservation at a restaurant a friend recommended, you’re way more likely to try the business we talk about and relay personal experiences about.

EVA: When the product/service match well with me, I want people to know and understand the reasons I like it. Maybe that will resonate with them too.

RRB: The two of you are very active in supporting issues that are important to both you and your listeners. This includes Breast Cancer Awareness and Gay Rights. How does this affect the success of your show?

Blake:  I can’t count how many listeners tell Eva “I got a mammogram because of you” or “You helped me realize it was going to be OK after getting diagnosed.”  Since her battle against breast cancer was all on the air, it’s been something that still — 10 years later — connects with so many people who went through the same thing. As for me, I’m gay.  I’m 100% out on the air so I feel a responsibility to represent the LGBT side of issues, which have been dominating the news the last few years.  I’m sure people get turned off by our show because of that.  It’s a risk we take to be authentic.  I could never ignore an important story about being gay, and I think if I did, I’d be disappointing my community.  So, while our show is primarily focused on fun and entertainment, we also get serious sometimes, and I think that helps deepen our connection with our audience.  I’ll never forget when a teenage listener named Maddie called to tell us she had come out to her family and her grandma wasn’t accepting it.  I talked her through it, on the air, as a sort of gay “older brother” who’d been through something similar. A few weeks later she called when her grandma had come around — and she was so happy.  You don’t have to be gay to appreciate how wonderful a moment that was for her, and people still talk about that conversation.  I like to think that MAYBE someone who hadn’t quite accepted the idea of treating LGBT people equally heard that and had a moment of sympathy and clarity.  If not, it was a great moment anyway.

Eva: Well they have both affected us each personally, Since Blake’s arrival, our LGBT listeners has grown a lot and parents of LGBT kids, too. I think it must be refreshing to hear us include gay callers in our topics—relationships are relationships. We have a huge female audience and breast cancer is a huge issue for many women (and some men). We’ve all been affected by it in some way. These things matter to our audience and us!

RRB: What advice would you give to the business owners who advertise during your show so that they can achieve the best results from your audience? 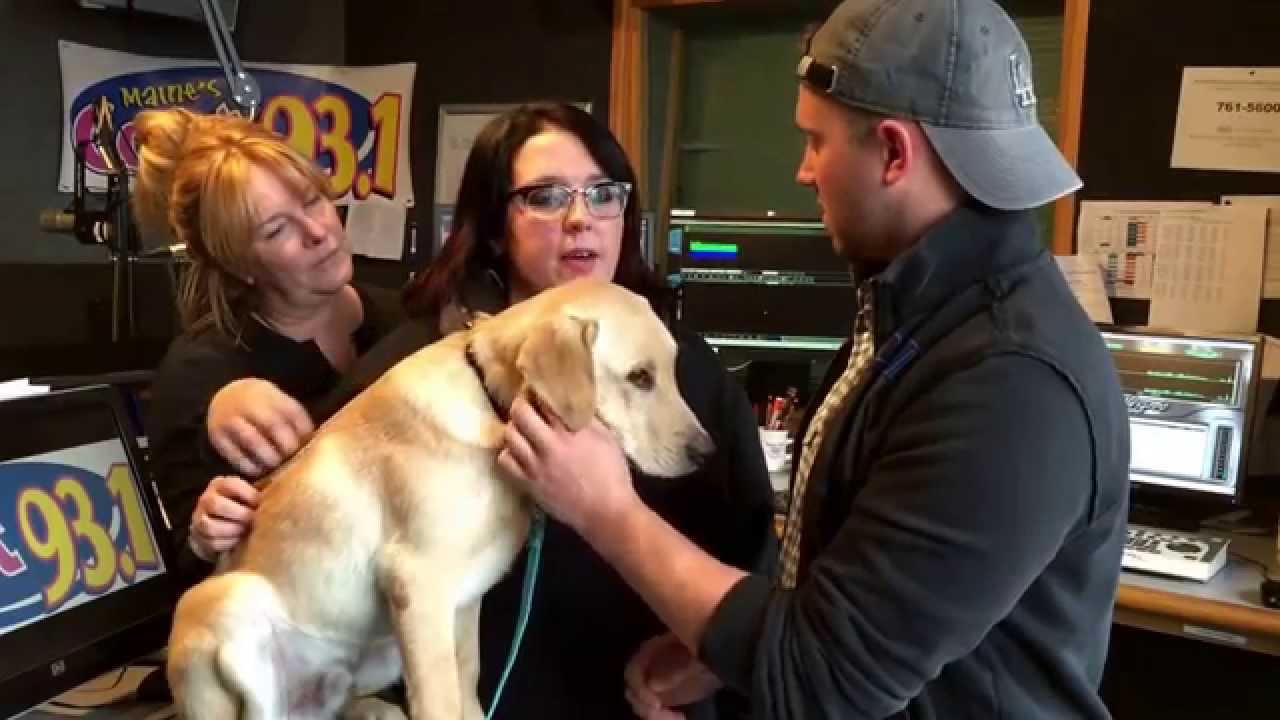 Blake: Like I said earlier, it’s SO hard to cut through these days.  There are so many options for any consumer, and they’re so easily found with one simple Google search.  So how do you make them choose YOUR business?  I think it’s all about personal relationships and making an emotional impact.  If you can make someone laugh or cry in your 60 seconds of airtime, they’ll DEFINITELY remember you.  Of course, that’s really hard.  Then there’s endorsements, or something that makes your company’s name memorable.  I think those are all elements that make a commercial stick out and connect with people.
The most important part is KNOWING your audience.  In the same way we take into account who’s listening and how we can connect with them, advertisers need to think about who’s listening to our show — and who they want as customers.  Then, how do you stick out?  How does 60 seconds in the middle of 2 or 3 or 4 other commercials stick out and make that listener/customer call, make an appointment, visit your business, etc.?

Eva: Be transparent and succinct in your message. Too much info or too many messages in one commercial can be overwhelming. Also, as much as we want to think our listeners hang on every word we say— hitting that message repeatedly and frequently is important.

RRB: Will you score a three-peat and sweep the readers polls again next year?

Blake: Who knows!  We are so flattered to have been recognized with these awards already.  It sure would be great to win again!  The truth is, it’s not about “winning” though.  It means a lot to us because it’s a sign there ARE people on the other side of the radio, and they like what we’re doing.  If we’re getting these awards, then we’re connecting and THAT’S what’s important.

Eva: From your lips to God’s ears!

RRB: When you are not listening to Coast (which is most of the time, of course), what else do you think is good Maine radio?

Blake: When I’m in the car, I’m usually listening to Coast or Q 97.9 since I like pop music.  I also switch over to Rewind 100.9 for some retro variety or if I’m tired of the song that’s on.  I’ve recently become more of a country fan so I listen to our sister station 101.9 WPOR now and then.  But most of the listening I do outside of the car is to podcasts of other radio shows, including Matty in the Morning (Boston), Eric & Kathy (Chicago), Wait Wait Don’t Tell Me (NPR), and Ask Me Another (NPR).

To read last year’s interview with Blake & Eva after they swept the awards the first time click here.